“…you shall receive power when the Holy Spirit has come upon you; and you shall be my witnesses in Jerusalem and in all Judea and Sama’ria and to the end of the earth.” And when he had said this, as they were looking on, he was lifted up, and a cloud took him out of their sight.” Acts 1:8-9

It is not possible to make sense of the Ascension if we do not understand the real constitution of the human being? Certainly not if we think that we are a just a physical body! We can only make sense of the Ascension if we know that we are more than just a physical body. Furthermore, it is not just about knowing that we are more than a physical body, it is about having a firsthand experiencing of our soul and spirit which uses the vehicle of a physical body to exist on this earth. A simple analogy is the way we use a motor vehicle to get around. In that analogy the car is our body, the mechanics is our soul and the driver is our spirit. We can only fully grasp this if we use our higher Imagination to build living images of it. When we manage to do that we may be able to have an inkling of what Ascension is.

Let’s look at the Ascension story very simply. For three plus years the disciples traipsed around with Jesus and observed how he integrated the Cosmic Christ into himself and used his pure powers of soul and spirit to make changes in the physical world. Then he died. Now they were able to experience his presence spiritually. Because the disciples had been with him so intensely and had been taught by him, they had developed an awareness of their own spirit. Their faculties of spiritual Imagination, Inspiration and Intuition developed to a certain point. So after the resurrection they saw Christ (Imagination) then they heard him (Inspiration) and then he disappeared completely. That is the Ascension. The line went dead, communication ceased, the video link was also down and they could no longer see him.

For ten agonising days they felt totally abandoned by Christ. They may have often wondered whether that was all there is. Then at Pentecost in a baptism of fire and spirit Christ enter into them as he had entered into Jesus when he was baptised in the Jordan. Christ was no longer outside them, now they had an inner experience of him – as we must.

As we go through the next ten days we can try to experience the utter desolation the disciples felt, their spiritual faculties failed them, it was as if they lost consciousness – at the least the consciousness that they were used to. It would have been frightening; they would have felt absolutely powerless. Perhaps this experience is necessary before we can have that immediate awareness of the presence of Christ within us, or to build on our awareness each year at this time. 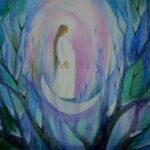 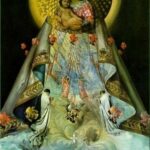