Here one shouldn’t just imagine radiating light rays that symbolize the divine – one should imagine the Gods’ forces that take possession of our interior, and then feel great thankfulness that should be carried into the cosmos – swim in the feeling of thanks and feel united with the Godhead.

One can often only hang onto this feeling for seconds, but after continued practice one will be able to have it much longer.

One is often called back to reality by a ringing sound, but this exercise leaves one with a feeling of being one with God and mankind – quite different from a feeling of loneliness.
~Rudolf Steiner, Berlin, 7th January 1912 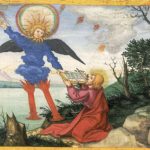