Today the major Australian newspapers report the results of a survey about what people believe in http://www.theage.com.au/national/god-is-still-tops-but-angels-rate-well-20091218-l5v9.html In this survey (which of course is never representative) it says “51 per cent of respondents say they believe in angels”. I would like to ask those 501 people what exactly they think angels are.

The Greek word angelos means messenger.  A messenger takes a message from one place or person to another and the purpose of a message is to inform. Therefore we must ask several questions. 1. What is the source of the messages that the angels receive? 2. In what form (language if you will) will it be conveyed to us?
It would be over-simplifying the situation to say that the angel carries a message from God. In an earlier post I showed that there are different ‘gods’ or spiritual beings who have certain responsibilities in the universe to keep everything in balance. Dionysius the Areopagite listed them, and in later posts I will explore them.
Angels feature often in the bible and seem to have quite a bit to say about the birth of Jesus which we are about to celebrate.

But as he considered this, behold, an angel of the Lord appeared to him in a dream, saying, “Joseph, son of David, do not fear to take Mary your wife, for that which is conceived in her is of the Holy Spirit; Mt 1:20

Angels are intermediaries who help and guide the evolution of human consciousness. We could even say that they are interpreters, what higher spiritual beings might want to convey to us is made intelligible through the angels. Of course, they wouldn’t use language; they speak to us in images – the universal language. The picture of a tree means the same thing to every human being on earth.

While some people might doubt the validity of what I say, I could point out that animals communicate with each other, and with us, in a way that we do not understand either. If anything is needed in the world today it is to remain open to notions about the presence of angels and other spiritual beings that cannot be seen with our physical senses. Rejecting these ideas leaves us in a darkness that our mind cannot penetrate. If we accept that there may be angels, and we listen out for their messages, we may be surprised by what we come to understand. This kind of understanding is an inner confirmation that something is true for us. We do not need to convince others of it; others must come to their own experience of the angelic beings in this universe.
May you hear the Christmas angels and come to understand something more about the purpose of the birth of Jesus who became the Christ. 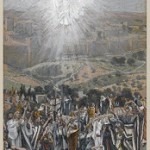 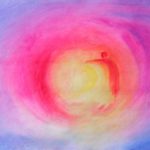 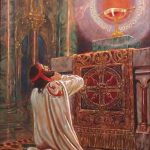