The power of Christ penetrates with his light and his strength what is Luciferic in us.

Mystery: The work on ourselves serves the best interests of the whole. The Archangel Uriel holds up a mirror in which we see ourselves as we are.

Understanding the activity of Lucifer is a very important task especially when it activates the work of Christ in our being. To understand Lucifer’s activity we first have to identify him. He is called the devil, diabolos, and is associated with qualities of warmth and enthusiasm which can develop into passions and desires. Do we express these in a self-centred or a universal way?

One way to identify Lucifer is to see how he tempts us with shortcuts and encourages us to be lazy. Each time we counteract these temptations we can become aware of how we use our will to overcome them. Our task in the evolution of human consciousness at the moment is to develop conscious use of our will. In this sense, Lucifer is providing us with the means to do this each time he tempts us.

The other way Lucifer works within us is when we discriminate. Whenever there is discrimination of race, creed, social status, and so on, Lucifer is at work. Lucifer gives us a sense of self, an experience of our I-being, that was his role in the Garden of Eden. We must now release that sense of self from our astral body, which is Lucifer’s domain, and awaken the Christed I, the I Am, in our soul and spirit.

In these ways our eyes are opened. Rudolf Steiner explains –

“Now here we have once more an opportunity of seeing what infinite depths are contained in the primal truths of religion if they are but rightly understood. For what we have expressed as a disarrangement is marvelously described in the Bible in the words that are spoken to man by Lucifer, when he is trying to tempt man. He says: ‘Your eyes shall be opened and you shall distinguish between good and evil.’ In these words lies a very deep truth. We are not to understand that the eyes only are to be opened. The eyes are here representative of all the senses. If we understand Lucifer’s words aright we may render them as follows: ‘All your senses shall work in a different way from the way they would work if you were going to follow the Gods and not me’ — i.e. Lucifer. Owing to the influence of Lucifer the senses have a different form of activity from what they would otherwise have.” Rudolf Steiner December 29, 1911

Our task is to open our eyes and see from the perspective of our I Am. Then “The Archangel Uriel holds up a mirror in which we see ourselves as we are.” 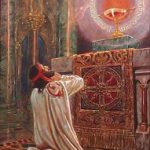